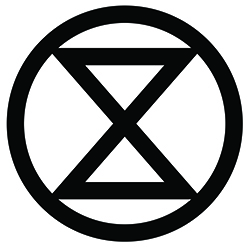 According to the most recent ‘Sunday Times’, the joint founders of the Extinction Rebellion, Roger Hallam of King’s College, London and Gail Bradbrook, have spent the last three years researching one hundred years of reform movements and were convinced that the overwhelming evidence for successful reform came about by peaceful protest.

Good for them. Instictively, I agree.

Indeed, Dr Gail Bradbrook seems to have got here, (although her doctorate is scientific and ‘real’) at least in part, via economics. Her Street School Economics caught PP‘s attention a couple of years ago.

The emphasis on non violence has given the police a problem as it ties up large numbers who end up being unwitting participants in the festivities as any force they use must be proportional. For me that is one thing that so far is not significantly broken. At least the police, unlike the banks, or indeed the current government, still feel they are bound by the rule of law.

Most Chief Constables consider their first task to protect the vulnerable, which is basically is what, they (and I) consider The Police should be about. And I suggest that is one principle that is an ‘heir to Blair’ which was actually effective in transforming outlooks.

Compare and contrast the Conservative adopted ‘hostile environment’, which has transformed the outlook on immigration. And for no good reason except to satisfy the tabloid press.

Meanwhile the police should of course prevent crime, though, that can also be as much about how we choose to organise our society. It is true that evidence that we still await prosecution of the Leave misdemeanours is worrying. But at least we do not have to endure the sort of widespread ill-discipline, if not worse, of the French police, who arrested a journalist, Gaspard Glanz, covering the Gilets Jaunes march in Paris, for a so-called ‘outrage’ (disrespect) towards a policeman who he had ‘showed the finger’ after the policemen had purposely jostled him in response to the fact that he should not be aiming a tear gas cannister at him. He was arrested and transported with considerable force to custody then kept there for 48 hours without food. He has been released and a trial date set for October and he has been banned until that date from covering any protests, (which will now be subject to an appeal).

Some of the police top brass have been suggesting that legislation may need to be improved in order to give them powers against peaceful ‘blocking’ demonstrations, but from where I’m sitting if legislation needs to be improved simply because Oxford Circus and Waterloo bridge are blocked, then society itself looks, I suggest, pretty fragile and rather poorly organised.

I conclude that Extinction Rebellion may be protesting but those complaining about them really are protesting too much.

Complaining about all those people to arrest and about no capacity to hold them or process them rather suggests that the government should not be complaining but engaging. If society cannot cope with these peaceful protesters then it is axiomatic, I suggest, that these large numbers of people have a valid point.

I enjoyed the fact that Extinction Rebellion offered food to everyone, encouragingly conscious of the fact that they have inconvenienced some commuters and locals.

I’m impressed too, with the video on the next stage. I’ve beeen to Nestlé management meetings that were much, much less well thought out than this and yet these are largely volunteers who seem to demonstrate much better psychology, orientation and sense of purpose (even if some could criticise the delivery).

Lastly and interestingly they have decided on no commercial use of their simple, recognisable, and striking logo which represents, I understand, an (egg) timer within the earth (shown at the top of this piece). They have an absolute ban on using it for any commercial purposes.

And yet it is already being adopted around the world.