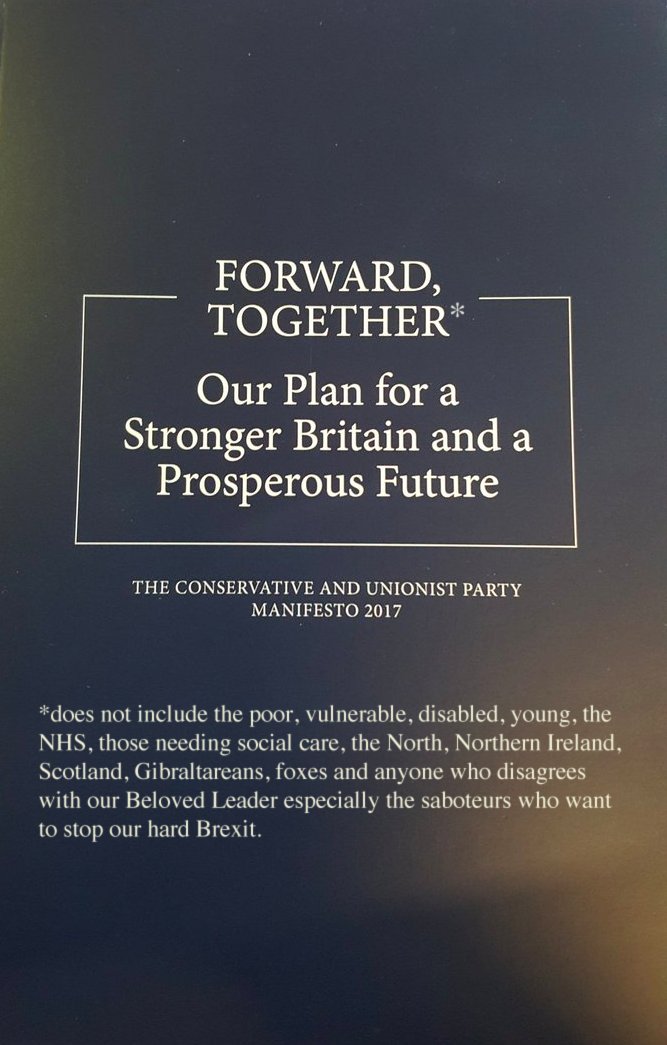 (Manifesto cover with acknowledgements to the actor David Schneider)

He could also have added children needing a free school lunch among the excluded.

The Conservatives are supposed to be clever marketeers (in case anyone should have missed an example of their despicable and infamous facebook marketing there is one here) but I cannot honestly see who they are selling to. Anyone that’s frightened? Probably that’s most of us, but there’s a very good reason to be frightened of them.

We are assured of hard times ahead but we’ve already had 7 years of austerity and the promised prosperity has yet to arrive. So we are now asked to believe that everything in the garden will be lovely in 5 years time and submit to a mixture of austerity and hard brexit in the meantime.

Additionally there are some unpublicised plans in the Conservative manifesto according to the Financial Times (paywall). The Serious Fraud Office is to be scrapped – they asked for a substantial budget increase so their reward is to be merged into the National Crime Agency.

The minimum income threshold for people to bring spouses into the UK is to be increased. What joy.

Corporation tax has definitely got to reduce but at the same time we absolutely must take food from infants and make the elderly pay for staying warm.

And then the condition for preserving the last £100,000 in every home will be that you take out an insurance product with a lien on the home and the insurance company will be wanting premiums and interest of course. These are already used, it appears, in the US – where else?

The Tory Party Manifesto is an excercise in self-flagellation for the voters. The destination is elusive and above all it gives no hope. That is very poor marketing.

“Forward Together” is something else that comes from America. It was the slogan used by Richard Nixon.  He did get elected but it didn’t end well for him –  I doubt the Conservatives can hope for better.